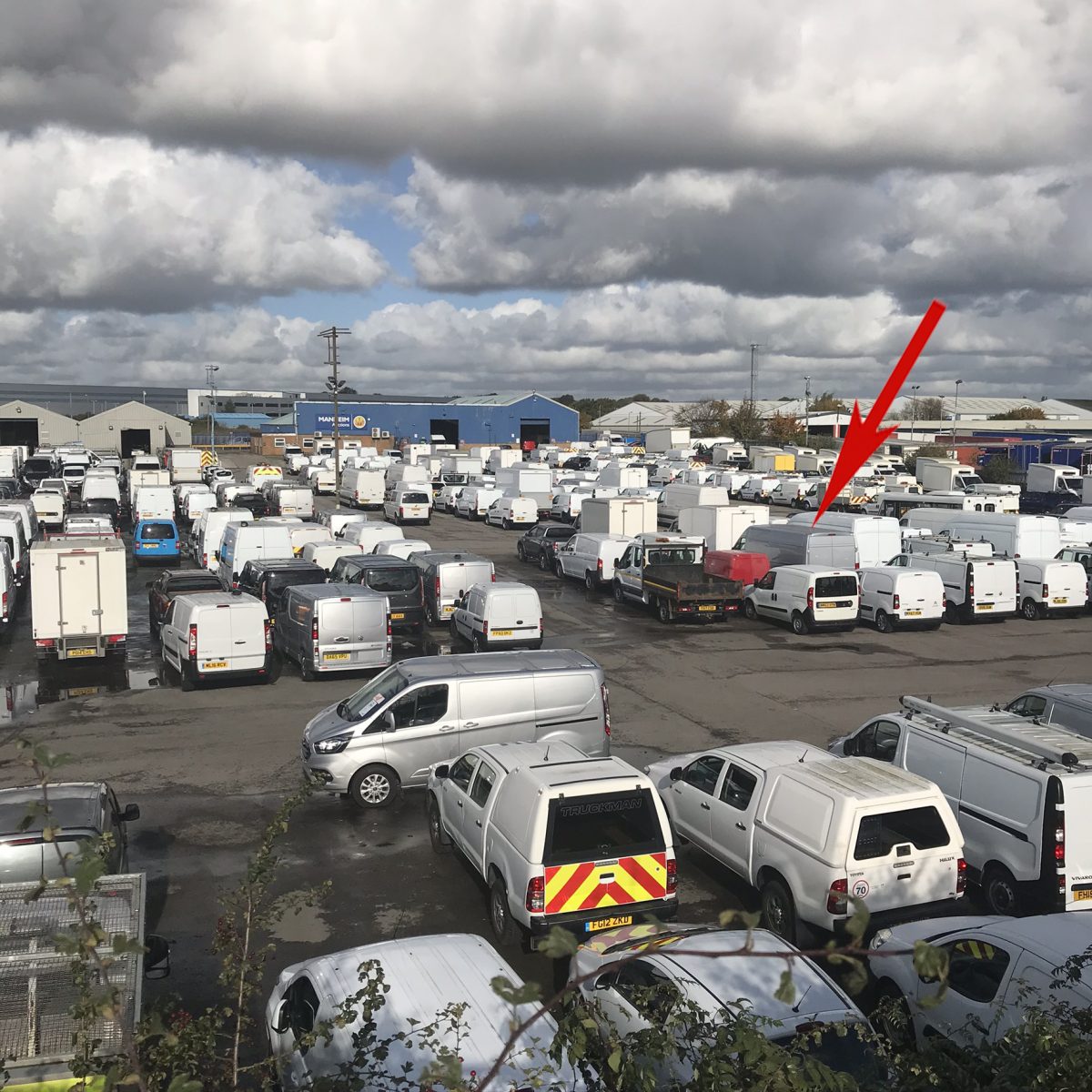 The red arrow in the image above shows our van surrounded by white vans that have been driven by, would you believe it, by white van drivers. Nothing wrong with white vans or their driver’s its just I wanted a less popular colour, something that doesn’t look too commercial. Ruby Red would have been my first colour choice (they are as common as chicken teeth) and silver my second choice.

New or Used? There are a few factors to consider. Firstly do I buy a brand new van and convert or do I buy a used van and convert? A brand new van would be great but my budget dictated that I buy a used van instead. My decision was to buy a fairly young van in good condition with under 50K on the clock. Eventually I bought a Peugeot Boxer, 3 years old at the time of purchase with just over 30,000 on the clock. The vehicle was previously used by a joiner and in reasonable condition considering this was a lease-hire vehicle.

Where to buy? I took the plunge and decided to try my luck at the auctions. Dont always expect a bargain, others are also looking for a good buy and a lot depends on the day and whos bidding. Vehicles will have a decent report but look carefully at each vehicle that interests you, make a note of a few vehicles because the more you view the easier it is to walk away if the price gets too high.

How to get a good price on an auction? Pay attention to the number on the vehicle thats in the catalogue (available online), it’s a good indicator to the order in which it will go through the auction. Auctions start early and the first vehicles that pass through the auction can sell for good money. This is because there are plenty of buyers and most haven’t spent their money. Sometimes its better to wait until midday or even late in the afternoon if you can take a risk of going home empty handed. The bidding on my vehicle started at around 12:30 pm, the bidding was light, fewer people were there, maybe they had gone for lunch, maybe they had seen enough. Whatever happened only one person was bidding until I made one final bid seconds before the hammer went down. To my amazement the single bid I placed was not challenged and I acquired my first ever Peugeot Boxer, faster than I expected.

Costs: Always remember that auction prices will have VAT added and the auction fees, these are published in advance. Whatever you decide to bid, stick to it, its easy to get carried away (many people do!).

Campervan Build Costs – The Golden Rule: Building a Camper-van is like building your own home. Whatever you think its going to cost, double it. Unless you have built a camper-van before then you are unlikely to come in on budget. Trust me on this point.

Know your budget – Know your Van: Depending on the quality and the amount of money you plan to spend on your conversion pay attention to the vehicle you buy. You may end up spending a lot on the interior, perhaps more than you planned. This may not always be economical in an older van. For example you could buy a cheap van, spend a small fortune internally and end up with “dead money” in other words a vehicle that has cost more to build than its worth.